I spent a lot of time this past week scouring the Internet for a suitable boat or boat design that might work well for AMOS. Being more of a bits and bytes guy rather than a mech head, I was focusing on finding a suitable kit, or perhaps some DIY plans that might work well and not be too difficult to build. In the process, I discovered why my kids enjoy Pinterest so much... what a great site!!! I had thought that Pinterest was just about crafts and such, but in the span of about 10 minutes I was able to literally look at hundreds of different boats and boat designs, many of them very innovative. This one in particular really caught my eye and looked like it would be the perfect size for a robotic watercraft: 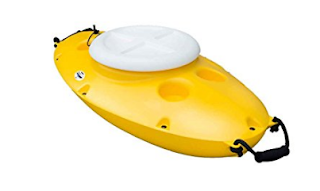 It's actually a beer cooler that can be towed behind a kayak or canoe, and holds up to 30 12 oz cans and 20 lbs of ice. It measures a little over 3 feet long, almost 2 feet wide, and about 1 foot high. It's called the CreekKooler, and I was able to pick it up on Amazon for a little over $200 Cdn, with free shipping. Considering the time and effort required for a kit or DIY project, or the cost associated with a more conventional larger boat, this cooler boat seems to make a lot of sense. After it has carried hundreds of microbial samples though, people might be a bit reluctant to use it to store their beverages...
Posted by Murray Lowery-Simpson at 8:16 PM No comments:

I have ignored this Blog for a while, but am starting it up again to chronicle the development of an exciting new project: AMOS (Autonomous Mini (or Microbial?) Ocean Surveyor. I have been wanting to do something in robotics for a while, and had toyed around a bit with ideas for a robot to pickup household clutter, or a robot for watering gardens, but then after an evening of watching various TED talks about robotics, I had a sudden inspiration: why not make a robot boat that could take water samples at multiple locations and measure microbial concentrations of those samples?

My family has been vacationing at Parlee Beach, NB for nearly all of my life, but the beach has been in the news recently for problems of E.coli and other bacteria in the water. Current testing has revealed the problem to be serious, but so far the sources of contamination have not been definitively identified. Also, the testing that has been taking place has been time consuming and laborious, and generally confined to the main beach itself. I thought it would be cool if the testing area could be expanded, and also simplified, so as to take a shorter length of time between sample collection and final test results.

Due to the ambitious nature of this quest, I have gone to half-time employment at my regular day job, but will still continue to do some contract work on the side, to help make ends meet. The extra hours freed up will be dedicated to making AMOS a reality.

So far the beginning is small, just a raspberry PI Compute module with a couple of Pi V2 Camera modules: 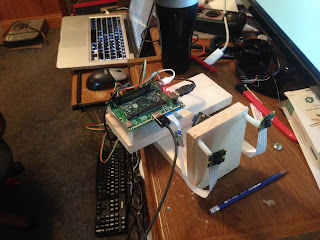 This weekend I have been toying with a couple of different OpenCV library functions for feature detection. I would like to give AMOS some reasonable amount of computer vision so that it can identify obstacles on the open seas and avoid them whenever possible. I did some testing using Harris corner detection and the FAST algorithm for feature detection.


The FAST algorithm seemed to work a lot better and faster, so maybe it will form the basis of AMOS's object avoidance code.

Posted by Murray Lowery-Simpson at 3:14 PM No comments: