March winds, April showers, help to bring the May flowers, but those March winds aren't great for doing AMOS tests on the open water. Nevertheless, the forecast for St. John was decent last Sunday: overcast with winds from the northwest at 17 km/h, so I packed AMOS Orange into the van, loaded on the kayak, and drove down to McLarens Beach, just a few km west of St. John. Oddly enough, there were two other kayakers already paddling out on the water, around the Irving Nature Park. They were interested in AMOS, but as I was following the robot from the kayak in a different direction, they warned me to "be careful  out there on your own, you'll die quickly if you fall in".

Below are a couple of videos of launching the boat, and having it go in a circle close to shore, shortly after the launch. It actually kept going in circles, which I believe was the result of a bug from having the first waypoint designated for taking 10 pictures at different angles. Only one picture got taken, but the boat kept going around in circles, close to shore, so likely there is an infinite loop that will need fixing later in the software. In a way it was good for getting the videos though, because I was too nervous later on in the kayak to fumble around with my phone, and only used it while still on shore.

To get around this problem with the first photo waypoint, I pulled out the laptop and created a new set of waypoints that did not include any photos. AMOS followed these quite faithfully: 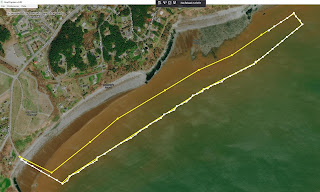 only occasionally deviating a few m from the intended course. I followed along in the kayak, but stayed close to shore, within about 50 m. With the offshore, northwest breeze there were only some slight, gentle waves, and nothing very risky, but I didn't want to risk leaving the safety of shore until AMOS's battery went low and it went into low power mode, on the return trip. I paddled out to the boat, and noticed that it was listed a bit to one side, which could only mean one thing: water intrusion. I attached the tow rope, and towed it back to the McLaren's Beach starting point. There, I tried to pick the boat up, but could only barely do it, as quite a lot of water had gotten in. By tilting the boat on its side, I was able to drain most of the water out through a small gap between the solar panel and the gasket, enough so that I could lift the boat into the back of the van and drive it back to Hanwell.
A closer inspection at home revealed the source(s) of the water intrusion. One large hole and a second damage area on the bottom of the boat: 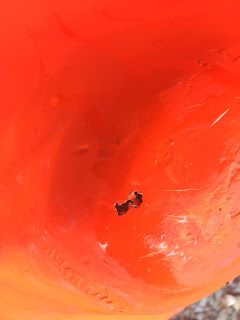 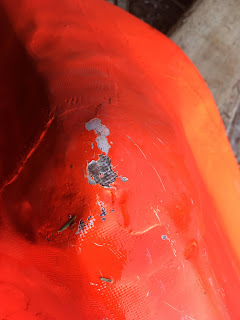 There were some pebbles and rocks on the beach where AMOS was launched from, and I did push and pull it in and out of the water from that beach a few times that day. 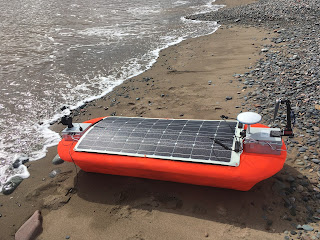 At some point those rocks must have damaged the bottom. Steven is currently working on repairing and strengthening the bottom in order to withstand this sort of (typical) abuse. He is also working on ideas for reducing the weight of the boat, as its current speed is relatively slow: only 2.4 km/h for the sampling course in this test, vs. about 5.5 km/h for the surfboard model. Some of that slowness could likely be attributed to the extra water weight the boat was carrying though.
In other news, the Raspberry Pi driver software for the AML Oceanographic temperature / conductivity sensor has been completed, and a test program has been written to try it out: it seems to work great! The temperature seems quite accurate and precise, and it had no trouble detecting a teaspoon of salt dumped into a few liters of water.
The Boat Captain software has also been updated to allow the user to easily create lawnmower-style sampling grids by clicking and dragging a surface area: 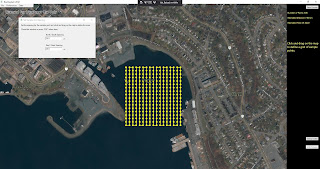 Posted by Murray Lowery-Simpson at 6:27 PM No comments:

Ready For a Water Test

The last couple of days have been warmer than usual, so hopefully it will soon be time to try out AMOS Orange in some actual water. A more solid, stainless steel mounting post for the GPS antenna was substituted for the 3-D printed version that had been used previously, and some wiring was completed to add humidity / temperature sensors and a solar power level circuit. 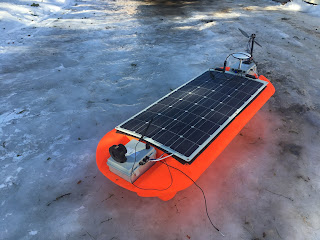 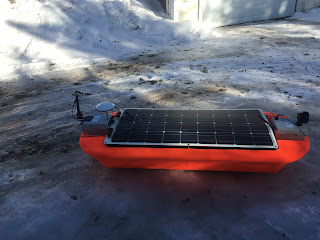 For now, the interior of the boat is just filled with scrap pieces of pink insulation foam: 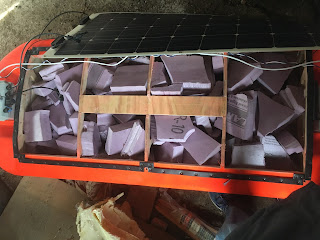 as a precaution in case the hull gets punctured.
The conductivity / temperature probe arrived this week from AML Oceanographic, and a software driver for capturing the data has been written already. I've also started writing a test application to try it out. It just uses a simple RS-232 serial connection, so I'll hookup a USB-RS232 to the AMOS computer for it.
Posted by Murray Lowery-Simpson at 7:01 PM 1 comment: