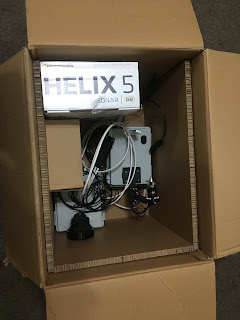 The last couple of weeks have been quite busy getting the first commercial order for an AMOS Board Kit ready for shipment. The order came from South Korea, so the first order of business was trying to find a safe and legal way to ship the 12 V, 10 AH LiFePO4 (lithium iron phosphate) battery by air. This unfortunately consumed a number of days trying to contact local dangerous goods shippers, checking out dangerous goods shipping courses, and then trying to see if there might be some way to find the same (or a similar) battery locally. Eventually a local reseller of the same battery was found, but purchasing the battery required a Korean phone number (for security reasons?) which I did not possess. So the final solution was to simply give the customer a discount and recommend they buy the battery themselves from the local reseller.

A stock unit was mostly ready for the sale, but a fish finder (for measuring depth) and solar panel needed to be added, and some extra wiring was required. These parts arrived after about a week and the wiring was completed, the magnetometer calibrated, and the unit made ready for testing just in time for the long weekend. We had made plans to go to my parents' cottage in Cap Brule for the long weekend, but could not get there until Saturday night. Sunday was rainy and very windy, with gusts up to 70 km/hr, so no testing could be performed that day. The following day was less windy (20 km/hr) but the cold waves outside the cottage were still a few feet high and smashing against the rocks. Not an ideal location to launch a small kids' foam surfboard. Fortunately the river in town in Shediac was more sheltered, so I took the boat over there. It went through a planned grid course very nicely, although the wind and current did blow it off course a little bit in the middle parts of the river: 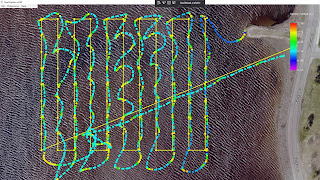 Unfortunately I had neglected to configure the software to record depth and temperature readings, so although the navigational capabilities of the kit were confirmed, the sensing functionalities were not. That's why things are tested before shipping right? We needed to leave soon to get home for a track and field practice, so the software was configured properly this time, and the boat taken over to a nearby lagoon for a quick test. The lagoon was quite shallow however, so although temperature and depth data were both collected, the depth readings were all 0.6 m, the minimum depth resolution of the transducer. The transducer was tested one final time back home in our pool to confirm that it gave readings between 0.6 m and 1.1 m as it was lowered and raised in the water.
Last evening, some final software was setup to change the wireless module on the Pi to act as an access point. This was first tested out on a spare Pi to make sure that it did not render the unit "unconnectable". Fortunately it worked, and will be nice out in the field for sending and receiving large files.
This morning was the final boxing up, which required a couple of hours for finding a suitable box, packing materials, and printing shipping labels. Here is the completed shipment, which Kelly kindly volunteered to wait in line (twice!) at the post office to deliver. 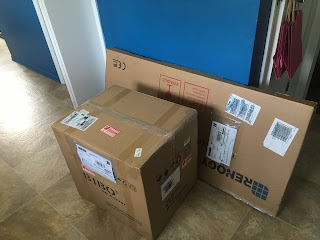 Posted by Murray Lowery-Simpson at 7:27 PM No comments:

New Brunswick is home to a number of beautiful lakes and rivers that would be ideal for AMOS water monitoring. One such lake that I learned about recently is Lake Utopia, located in eastern Charlotte County, about 1 km northeast of the town of St. George. According to Wikipedia, it has a couple of claims to fame: it is connected to the Magaguadavic River by the second deepest natural canal in the world, and according to local legend, the lake is inhabited by a sea monster known as the "Lake Utopia Lake Monster".

My daughter Hannah and I had made plans to drive out to the lake with our canoe and AMOS this past weekend. It was quite windy (28 km/h from the northwest according to the Weather Network) and still fairly cold (high of about 12 deg C) so a route was made for AMOS that stuck close to the western shore of the lake, starting from Canal Beach, and following a circuitous route down the canal to the Magaguadavic River. I had previously connected the fish finder / depth transducer to the boat, along with the temperature / conductivity probe, and AMOS was set to collect this data throughout the trip at one second intervals.

Even in the canal, the wind was quite strong, working against us and making for a slow trip. We were a bit faster than AMOS in the canoe, so would usually canoe a few hundred meters ahead of it, then take a break and wait for it to catch up. Here we are in front of an old covered bridge on one of our breaks: 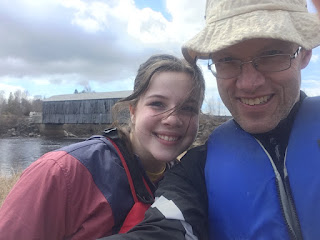 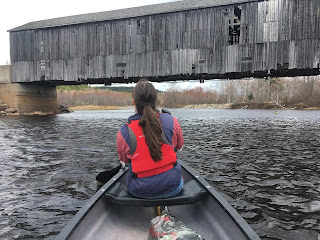 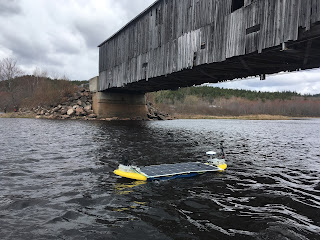 I was encouraged to see that the boat performed well despite the relatively high wind. Hannah shot this video as AMOS was rounding the point to go from the lake into the canal:
We made it to the Magaguadavic River, and paddled a few hundred meters down there, towards the town of St. George and a hydroelectric dam. We soon turned around though, as it was getting late in the afternoon. Here is the data that AMOS collected over the trip:
Depth (m): 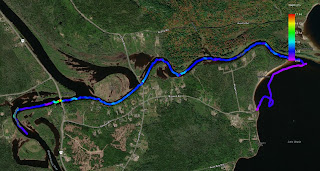 Most parts of the canal were about 4 m deep, although AMOS did pass over some much shallower parts (indicated in purple) and there was a much deeper area (indicated in red) near a bridge that was over 15 m deep.
Temperature (deg C): 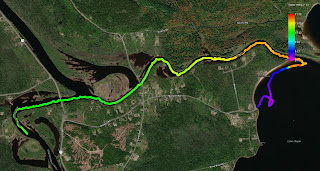 I found this temperature distribution to be interesting / perplexing, since it shows that the warmth from the shallows at the mouth of the canal was being "transported" down the canal, although the water at the surface was quite clearly moving from the canal into the lake, since the wind was ~ 28 km/h from the northwest. Perhaps this means that the deeper, non-surface water was flowing in the opposite direction, from the lake into the canal, and that diffusion and / or turbulence from the wind was allowing the warmer water to come to the surface?
Conductivity (ms / cm): 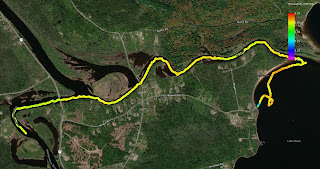 Overall the conductivity was quite low throughout, with only some slight differences. Conductivity near the shore of Canal Beach seemed a bit higher, perhaps due to the sandy soil and shallow water level.
I hope to make some return trips to Lake Utopia later this spring and summer, to sample some of its other sections. It's a great spot to spend a relaxing day outdoors! 😎

Posted by Murray Lowery-Simpson at 7:32 AM No comments: