AMOS: Will Work For Beer!

This past weekend I had some time to take AMOS out on the St. John River in a couple of locations to test out the new dissolved oxygen sensor. The first location was just south of the Walking Bridge in downtown Fredericton, near the West bank of the river. AMOS did a short up and down run there on Friday and Saturday: 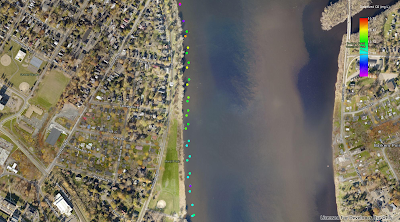 Dissolved oxygen levels on Friday (July 24) ranged from 14.2 mg/L to 15.6 mg/L. There had been a strong thunderstorm with about 10 ml of rain, about 5 hours before the readings were taken. Rain water absorbs oxygen from the atmosphere as it falls, so that can increase oxygen levels in surface water, especially near land where the runoff flows into the river. 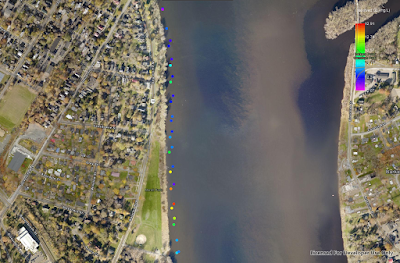 Dissolved oxygen levels on July 25 ranged from 12.1 mg/L to 12.9 mg/L. The water appeared slightly more cloudy, but there was no visible evidence of any algae.

Later, on the afternoon of the 25th, I took AMOS to the Kelly Creek Basin area near Woolastook. This water was more sheltered, and I wondered if algae would be more plentiful there, with an associated lower level of dissolved oxygen. Indeed, there definitely was more algae, which was noticeably visible in some shallow pockets of still water: 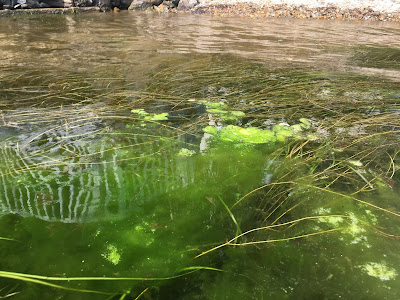 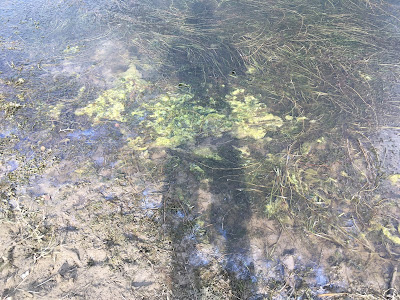 There was also some petroleum-based material just below the algae in this photo. 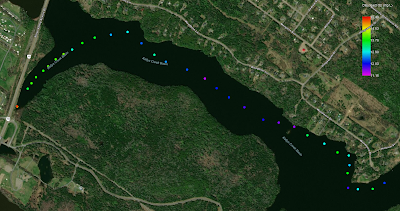 The low-ish purple readings in the above image near the small island were near several small patches of algae, where the water was fairly shallow. I would have expected the readings in the small sheltered cove in the western edge of the above map to have had lower dissolved oxygen readings, but actually these readings were at a uniformly good level of about 13.75 mg/L. This area also happened to have a large amount of water grass and other vegetation growing in it, which probably offered a beneficial photosynthesis boost to the oxygen levels there.

I was able to observe a number of small fish in the water, and there were a few people out fishing as well. A couple of them enjoyed paddling out to meet AMOS in the water, and were impressed that it stopped before hitting them and turned to go in a different direction. They even gave AMOS a can of beer. 😊 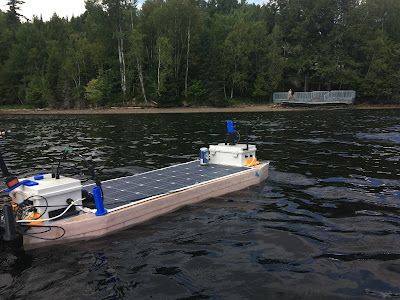 Posted by Murray Lowery-Simpson at 9:10 PM No comments:

This weekend, a second attempt at writing a complete geo-message on the St. John River was made: 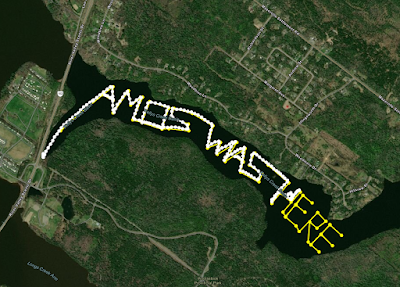 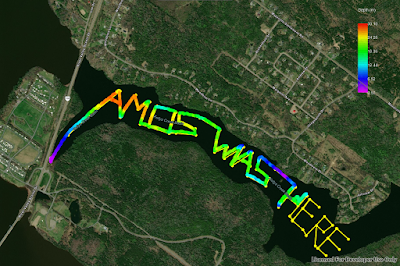 Due to the cloud cover that day, AMOS didn't have enough charge to complete the approximately 10 km message: "AMOS WAS HERE". The intended route was indicated in the above screenshots by the yellow path. The GPS points listed in the ship's log file are the white points at top, and the measured depth data (collected every second) appears below.

The dissolved oxygen software was coded last week, and the actual equipment arrived yesterday, so hopefully tomorrow I'll find some time to hook it up and try out the calibration routine (it can be calibrated in air to atmospheric oxygen levels).

A few days were also devoted to working out some bugs (really just code that was never finished) for various network communications routines in the new BoatCaptain user software.

We are also now trying to find beta test locations for AMOS. If you happen to know of anyone needing automated, geographically distributed water monitoring (preferably in Atlantic Canada), please let me know!!!

Posted by Murray Lowery-Simpson at 7:40 PM No comments:

This evening I thought it might be cool to do a video demo for the blog of the prototype paddle that I 3-D printed. Until you actually try something, you're never really sure how it's going to go. Hope you have a good laugh:


The paddle was hinged so that it would bend freely in one direction but would be unable to bend in the other direction. In theory, this would allow a back and forth motion of the paddle to propel AMOS forward. I guess I'll need to think some more on the mechanical design of this one.

Today I also started writing some code for a new dissolved oxygen probe from Atlas Scientific. It uses an I2C interface and is fairly well documented, so it shouldn't be too hard to add. It had been on back order for about a month, but just shipped yesterday, so hopefully it will be here soon: 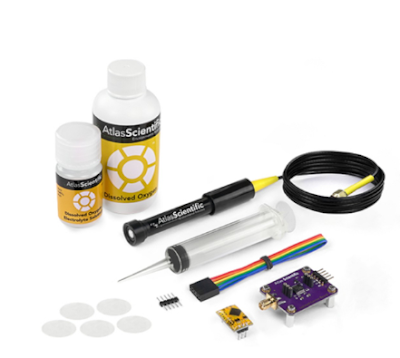 Other software work this week has been completed on the Boat Captain program for downloading data and log files from AMOS.

On Friday afternoon, I did a short live demo of AMOS in downtown Fredericton. Everything worked great! Here's the track comparison image, depth data and a nice picture that AMOS took before it returned to the launching point: 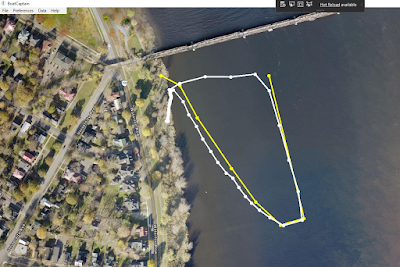 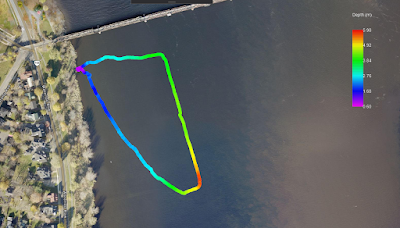 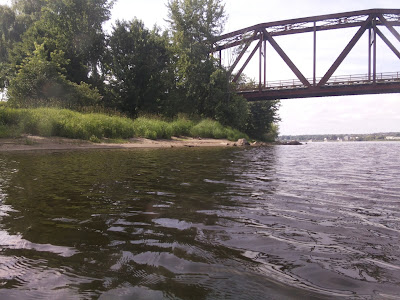 Posted by Murray Lowery-Simpson at 7:10 PM No comments:

AMOS set a new single-trip distance record on the weekend, but just barely: 10.95 km. According to this blog, the previous record was 10.85 km set last year. I had a route planned for a little over 12 km, but ran into a strong headwind on the final stretch and had to leave to go home for supper. Here's a video of the boat approaching the Walking Bridge:


Lots of people in motorboats paused to inspect AMOS on its journey, but luckily no one took it. Perhaps the crazy jumble of wires coming out of the back box act as a deterrent. I should probably transfer the warning text that I made for last year's AMOS to this one.

Here's the route that AMOS took, expressed as depth data: 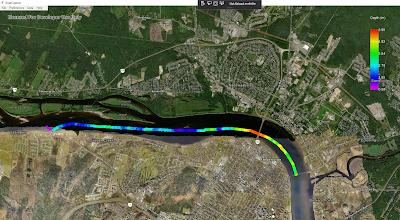 The new 30A dual-motor driver arrived in the mail this week and I eagerly hooked it up to try it out, but goofed and reversed the + and - 12 volt battery wires by mistake. So... I never got it working and it now seems to be a brick. A replacement is on its way, but according to Amazon it's not expected until September. I got a shipping notification today though, so hopefully it won't really take that long.
Posted by Murray Lowery-Simpson at 6:46 PM No comments: