Swimming With Beavers and a Birthday Road Trip

While AMOS Orange was being repaired last weekend, I took the foam surfboard over to a local beaver pond to test out the camera software and the new AML conductivity / temperature sensor. The hope was to have AMOS get close to the beaver lodge and snap a few pictures, while at the same time make sure that the temperature / conductivity sensor gave reasonable looking data. 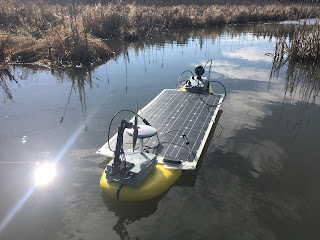 I turned on the boat, then rummaged around in my backpack to pull out the laptop and wireless transceiver. As I was doing this, I was surprised to hear the propeller whir into action; it had achieved a GPS lock sooner than expected. I set the electronics aside and then ran down to the water's edge to make sure the propeller didn't collide with a nearby concrete culvert. It didn't, but I tripped on some uneven ground, and tumbled into the water. It was only a couple of feet deep at the edge, but was deep enough to get a pretty cold soaking.

AMOS was off, so I let it follow its programmed route while I tried to dry off a bit in the sun. Once it got close to the lodge, it unfortunately became stuck on a patch of surface ice:

so the pictures that it took of the lodge were not as "close-up" as I had hoped for: 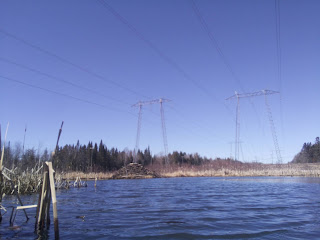 The temperature and conductivity data seemed pretty good though:
Temperature: 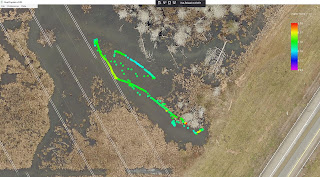 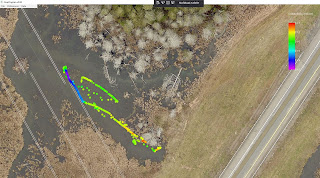 On my birthday (April 07) I had a chance to visit Lime Kiln Cove with AMOS Orange. Steven had recently repaired the leaks in the boat, and added some layers of epoxy to give it more strength and resilience.
I 3-D printed a bracket to fix the conductivity / temperature probe to the front of the boat, and set the software to collect data at one second intervals as the boat was following its course. The actual vs. planned course of the boat can be seen here: 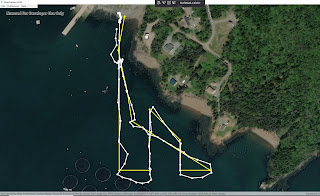 The planned route is indicated with yellow lines and dots, and the actual route is given by white lines and dots. The satellite data used in this and the other images below is a few years old: the fish farms located in the southern part of the image no longer exist. A local resident who was observing this test told me that they were removed a couple of years ago.
The wind was out of the northwest that day, and tended to push the boat a bit off course near the areas where it was making 90 degree turns. The tide was a bit lower at the end of the test, and the boat became stuck around some rocks near shore as it was returning. I was able to use the remote control at that point to get it turned around and off the rocks so that it could drive itself back to the starting point.
Some videos of the testing can be found here:
https://drive.google.com/drive/u/0/folders/1OhqVCtVhsO2azNTflnW3Eh8G-0ZSdGth
In a couple of these you can see that the boat has some issues with stability in the presence of a cross-wind. This was an issue for the conductivity measurements at some points during the test (the spikes in the graph of conductivity vs time below): 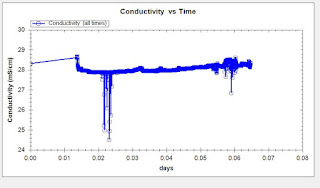 The probe likely lifted out of the water at times, resulting in falsely low conductivity readings.
Overall though, the conductivity and temperature data looked pretty reasonable: 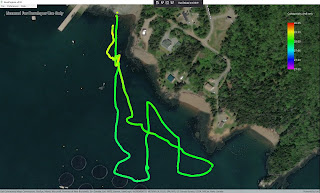 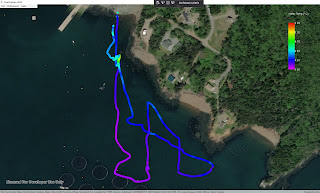 The repairs held up for this test, and no leaking was observed. But for most applications, I think a surfboard design would be preferable. AMOS Orange is relatively heavy and is about 3 times slower than the foam surfboard, given the same air propeller (it would probably need a stronger air propeller, or perhaps even a water propeller added). When used without a significant payload, as it was for this test, it sits fairly high above the water, making it unstable in choppy water or windy conditions. Still in some situations, it might prove useful, for example if a very large payload was required.

Posted by Murray Lowery-Simpson at 6:58 PM No comments: