As mentioned previously, the vital parts of AMOS will be released as products in their own right in the coming months, leading up to the release of the entire robot in the summer of 2020. The first of these was the waterproof housing that was built for the Raspberry Pi camera that AMOS uses: 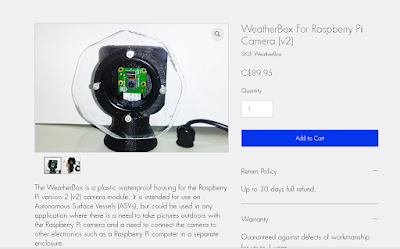 This product was called the WeatherBox, and a link to its store location can be found here: https://www.innaturerobotics.com/product-page/weatherbox-for-raspberry-pi-camera-v2 This product was actually split into two different models, one with the Raspberry Pi v2 camera and cable included (WeatherBox-CAM) and one without.

The second was the 16-bit, variable gain A to D board that was described last week. It was populated with all of the necessary components, and all four channels and gain settings were successfully tested out with a little Arduino program and circuit that I made for that purpose: 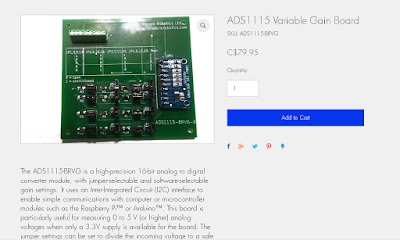 This one was called the ADS1115-BRVG and its product page can be found here: https://www.innaturerobotics.com/product-page/ads1115-variable-gainboard.

Since the website's SEO (Search Engine Optimization) is still sub-optimal, I'm reading some tutorials on how to get your webpage to show up higher in search page rankings. Apparently there is something like 200 different parameters that Google considers in these rankings. Right now I'm just starting out; trying to make sure all the pages on the website have suitable titles and descriptive text. One thing that was encouraging today, was that when I searched for "nature robotics" with the quotation marks on Google, www.innaturerobotics.com was the first link. Without the quotation marks, it was on page 2, 14th place overall. Those high rankings are probably biased by my location however, as I read that Google ranks local businesses higher.

This coming week I would like to try some calibration experiments on the IMU (Inertial Measurement Unit) and current draw sensor. I suspect that both of these are affected somewhat by temperature, so I'll try heating them up in a box and then put them outside to cool slowly for an hour or two, to see how the outputs change. The magnetometers on the IMU should also be calibrated more carefully than what I did previously by hand. Probably a motor turning apparatus, similar to what I have used before at Measurand would work well.


Posted by Murray Lowery-Simpson at 7:44 PM No comments:

The End of Testing Season

Fall transitioned very suddenly into winter these past couple of weeks in New Brunswick, effectively halting AMOS's field testing. The final distance total was 180 km, just 20 km shy of the 200 km goal. The upcoming winter months will be spent transitioning AMOS from a pretty good prototype into a viable product that can be consistently manufactured and used by actual customers. One aspect of this involves converting the existing through-hole prototyping board circuits into more professional looking printed circuit boards. RPC Science and Engineering (rpc.ca) is helping out with a circuit board design and layout for the wireless telemetry and diagnostics system that AMOS uses. Some work was also done in-house to get a printed circuit board completed for the 4-channel A to D module, with an I2C interface for easy connection to the Raspberry Pi, and resistors and settable jumper pins for setting gain on individual channels. 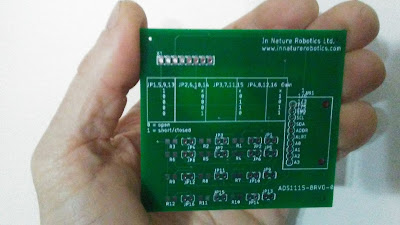 Unfortunately I missed an obvious alignment error in the silkscreen printing for the jumper settings table, but otherwise the board looks pretty good. I'll need to populate it with the necessary components and try it out to confirm that it works.

More work was completed on the anchor testing apparatus as well. A small crane assembly and a framework for holding the motors, Arduino board, and motor drivers was 3-D printed and put together for some simple anchor testing:

This time a 16-pound fishing line was used to hold the wrench, and it seemed to work pretty well. It  occupied less space than the previously used string, and didn't get frayed or damaged from use. Some micro-switches have been ordered and will be positioned as "stopping points" for the swivel and lifting motions. I'm wondering about a strain sensor or something for the crane arm to detect when there is slack on the line, as it isn't really a good idea to keep unwinding the fishing line once the anchor reaches the bottom and the line goes slack. Or maybe just let the anchor free-fall without motor intervention.

In Nature Robotics Ltd. expanded its web presence last night, as it now has an official Facebook page. Check it out: https://www.facebook.com/InNatureRobotics/ and give it a "Like" to get a weekly update on what is going on with AMOS and other development work.

Some work has also been done on a business plan for In Nature Robotics Ltd., although this is proving to be a lengthy process. I'm currently evaluating the competition in the Autonomous Surface Vehicle (ASV) space for inland waterways and there are some pretty good products out there, but I think AMOS can find a niche with its light weight, airboat design with low draught allowing it to pass easily through shallow water with vegetation, and ability to operate autonomously for extended periods of time without any human intervention. So far there doesn't seem to be anything out there that can do all 3 of those things, but the competition does seem to be growing and improving quickly!


Posted by Murray Lowery-Simpson at 5:27 PM No comments:

My business mentor in the Venn Garage program, Alicia had suggested that it might be interesting to see if AMOS could be used to look for microplastics in water. Microplastics are generally defined as any fragment of plastic that is less than 5 mm in length. There are a number of ways that researchers can sample water to check for microplastics. One of the most common ways is to drag a net with very small pore holes behind a slowly moving boat. Usually the net has a pore hole diameter between 100 and 500 micrometers, depending on the minimum particle size desired. As a quick experiment with AMOS, I 3D-printed an opening for a reusable produce bag, made of a woven fabric material with a pore size somewhere in the 300 to 500 micrometer range. 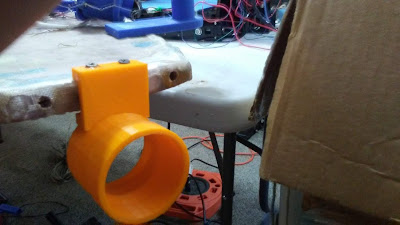 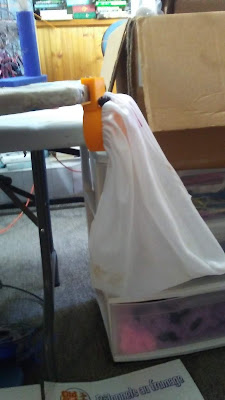 I took AMOS back to the Kelly Creek Basin area of Woolastook Park, and set it for its usual course. The day before we had had our first major snowstorm of the year, about 10 cm of snow, and there was a bit of a chill in the air. Although the water temperature was around 9 degrees C, the air temperature was only -2 deg C at the conclusion of the test. 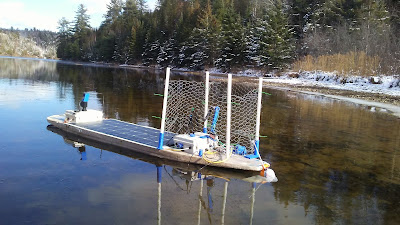 After traveling for about 4 km, I noticed that AMOS seemed to be stalled in the middle of the river. I paddled over to investigate, and found that the propeller motor was making a strange, high pitched whining noise. Thinking perhaps it was just a strange combination of the low temperature and low battery, I tried to change the battery for a spare that I had on hand. No difference. So I hitched up AMOS to my tow line and towed it 4 km back to the launch point.

The post-test analysis showed that the motor was completely seized up. Researching a bit about drone performance in cold weather: apparently you should avoid flying a drone in cold, damp weather, such as directly above water that is considerably warmer than freezing air. Humidity from the warm water can condense and build up on the propeller blades, in some cases causing excessive vibration that can damage the motor. That's my best guess as to what must have happened. I didn't think to look for ice buildup at the time, but it probably would not have taken very much to cause a significant vibration. The propeller is very thin and light, and it spins extremely fast.

Back on shore, I had a look at the material collected within the produce bag: 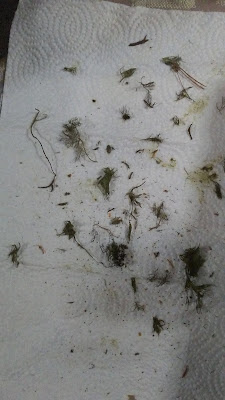 Mostly it was a species of river grass common to the area, but there was also a tiny snail shell, a strange 2 mm long shrimp-like creature, many small black dots (< 1 mm diameter) that appeared to be organic, but I couldn't be sure, and a 2 mm long piece of some white substance which was probably plastic, but might also have been a small bone fragment. Based on the diameter of the collection hole and the distance traveled, approximately 22000 L of water was sampled. There was no noticeable reduction in the speed of AMOS, which was encouraging to see. I guess it was also a good thing to learn that the water around Woolastook Park appears to be mostly free of microplastics (at least visible microplastics).


Posted by Murray Lowery-Simpson at 4:56 PM No comments:

Since scaling back the original one year distance goal from 1000 km to 200 km, I've been working hard at testing AMOS, trying to reach the 200 km total distance traveled mark before the water freezes over. Right now it's at 167 km, so it's within reach. This past week had a few good test days; with the 10 A-H battery and the weak November mid-morning sun shining, AMOS can go for almost 7 km before it detects the charge getting low and heads for a re-charging location (i.e. one of about 6 predefined spots on the north shore of the river that have good sun coverage and are a bit hidden from populated areas. Rather than hope that it will stay in the re-charging location and charge, I have been just towing the boat back home and plugging the battery into a wall charger. Sort of a cheat I guess, but there are only a few useful solar charging hours at this time of year. In these tests, AMOS has been performing really well. Earlier tests in October were done using my laptop to start a shell connection to the Raspberry Pi and initiate the commands to get it going. I eventually discovered though that the program would suspend itself as soon as the boat got out of WiFi range. So now I've just set AMOS to start itself automatically after booting up, and the program has been running smoothly, at least the last 3 times that I've tried it. I've also tweaked the LiDAR avoidance code a bit, to avoid making too many unnecessary turns. 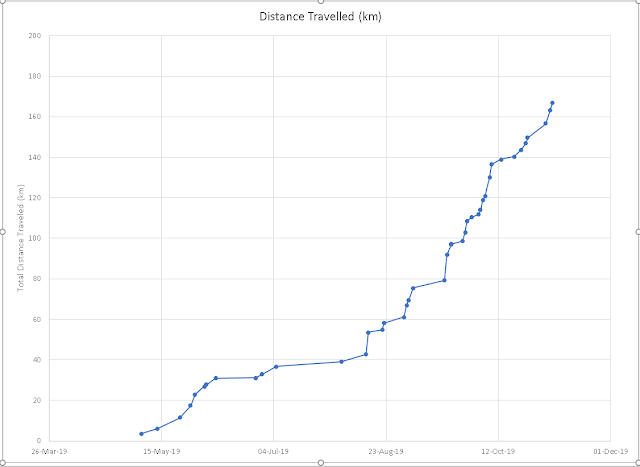 It's too bad that the boat wasn't ready for heavy testing in the summer months of this year; had it been capable of autonomous operation then, the 1000 km goal might have been achieved.

We are expecting 20 cm of snow here on Friday, and I might be having an arthroscope on my knee next week. But hopefully there will still be some opportunities to get AMOS to 200 km. ☺
Posted by Murray Lowery-Simpson at 4:39 AM No comments: