Someone interested in AMOS recently inquired if it would be possible for it to tow a similar sized (~ 10 kg) boat behind it from one side of a river to the other and back without deviating downstream from the intended path. I responded that it should be possible if the speed of the river were not too great, i.e. too close to (or beyond) the maximum possible speed of AMOS in still water and wind, and that I would attempt a test using the old AMOS surfboard prototype as the vehicle to be towed.

On Saturday we had a lot of rain (I think around 30 mm) and I didn't want to get wet, so I waited until the following day to do the test. On Sunday it was nice and sunny so I took AMOS down to the river and attached the surfboard base from prototype #2 to the back end and duct-taped a 5 kg weight to the top of the surfboard to simulate a10 kg boat: 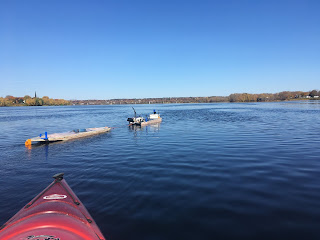 Because of the recent rain, the river was very fast. Near the west shore (where AMOS started) it appeared to be ~ 0.5 m/s at the surface, and out in the middle it was more than that (~ 1.1 m/s, see drift calculation below). For some reason, the flow was a bit less on the eastern shore, but probably still ~ 0.3 m/s or so. The photo below shows the intended crossing in yellow, and the actual path in white. On the first attempted crossing from west to east, the battery charge was detected as low (I have been having some problems with the LiFePO4 battery maintaining its charge recently, I think because it has been close to 0 deg C here) so AMOS shut itself down and drifted about 400 m downriver without power for 6 minutes. This would correspond to a surface flow speed of about 400 / 360 = 1.1 m/s, or about 4 km/h, which is too fast for AMOS, especially when trying to tow a second boat. I towed AMOS and the surfboard in my kayak over to the eastern shore, and then let it try to go back west on its own. It was relatively close to the intended course (within 30 m) for about 250 m of westward travel this time, but then the strong current in the middle started to get the better of it, and once again the battery charge got low, so I shut it down and towed it back to the start. 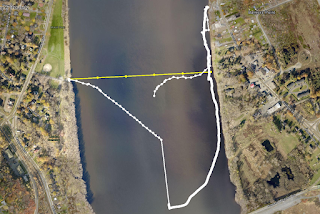 Some videos of the test were recorded here:

Probably using some water flow velocity sensors would help to keep the boat closer to the intended line, assuming the maximum flow velocity were not too great, but the navigation algorithm would still need to rely on GPS on top of this to make sure that the intended course was being followed. The GPS used in AMOS is a low-cost model, and has a typical accuracy of something like +/- 10 m. High quality handheld units can get down to a couple of meters accuracy I think, and if you want cm-level accuracy you need to use surveyor-type hardware. I'm not sure about the technical feasibility of putting surveyor-type hardware on a robot boat though.

At any rate, I'm going to re-attempt the straight-line test without the tow vehicle either tomorrow or the following day. The electronic speed controller will be moved back into the battery box for this test, in order to provide a bit of warming for the battery enclosure. It had been moved outside the box, behind the propeller this summer to prevent overheating in the hot summer sun, but that isn't really an issue now near the end of October.

Next week I will be presenting an update on AMOS to the Raspberry Pint group via Zoom: https://www.eventbrite.com/e/raspberry-pintdigital-making-fun-with-raspberry-piarduino-esp32-etc-tickets-124921590841?utm-medium=discovery&utm-campaign=social&utm-content=attendeeshare&aff=estw&utm-source=tw&utm-term=listing @Eventbrite  This is a very tech-savvy group, so will be a good opportunity to get some feedback and tips!

Posted by Murray Lowery-Simpson at 5:35 AM