Last week we traveled to the Bras d'Or Lake in Cape Breton to do a small demonstration of AMOS to people from university, government, and industry. Before that though, I drove down to Dartmouth to meet up with Lawrence and head over to Red Bridge Pond for a quick AMOS demonstration to Yves Bernard, Ulrich Lobsiger, Mike Hayes, Mike Cyr, Karan Kharecha, and Eric Siegel. 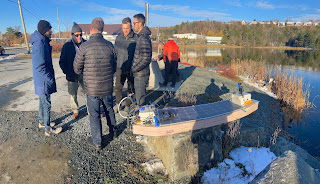 Photo credit : Lawrence Taylor
The night before, I had plotted a course for AMOS to follow around the perimeter of the pond and we were at the pond about an hour before the scheduled start, so I tried it out. The planned course did not take into consideration a small island of grass that was not apparent in the map. AMOS headed directly for it, and promptly got stuck. I paddled out in the kayak and retrieved it, then plotted a different out and back course that stayed in deeper water. Once people arrived, AMOS performed well over the defined course, and Yves used his drone to get some video footage. (Hopefully the footage turned out ok - there was some question about whether the SD card used to save it had been formatted correctly.) Here is some footage captured from the AMOS video camera that was set to record a frame every time the LiDAR detected an obstacle:
Later that day Lawrence and I drove to Whycocomagh in Cape Breton where we had rented a cottage on the shore of the Bras d'Or Lake. Here was our view from the front porch the next morning:

During our stay in Whycocomagh, we were hosted by Bruce Hatcher, the University Chair in Marine Ecosystem Research at UCCB and the director of the Bras d'Or Institute. He had a Zodiac boat: 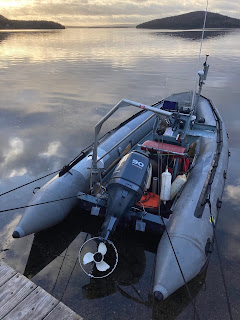 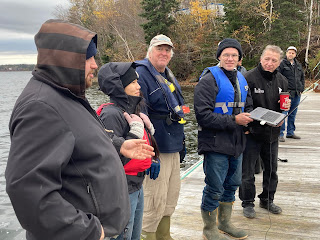 and I introduced AMOS to them, before setting it off on its pre-programmed course:
Video credit: Lawrence Taylor

but then AMOS unexpectedly disappeared near a large grey boat that was parked at the corner of the opposing dock. Bruce and a couple of his students went over to investigate in the Zodiac. When they approached the area, one of the students exclaimed "Oh shit Bruce, I think it must have gone under the dock and disintegrated!" Upon closer inspection however, AMOS was found underneath the large grey boat, which actually happened to be a catamaran. They were able to retrieve it, and since it did not seem to be moving anywhere on its own, brought it back to our dock, where it was discovered that the propeller blades had both been broken, most likely when it was underneath the catamaran. Unfortunately, I had left the spare propeller back at the cottage, so that was the end of the demo. AMOS did capture some interesting footage from its experience though:
After the demo, Lawrence and I went out with Bruce and Allison and Piotr to check out a 50 m "Death Hole" with a couple of ROVs. This hole featured a mysterious layer of floating material about 16 m deep that both ROVs were able to examine with their camera systems. Allison and Piotr's ROV collected water samples for their lab at Dalhousie University using a very cool apparatus of spring actuated syringes. Bruce's ROV collected a smelly, dark sample of mud from the bottom of the hole:
On the return trip back to Dartmouth, Lawrence and I stopped near Antigonish to try collecting some data in Pomquet Cove. The wind here proved to be a bit too much for AMOS,  so we tried a stream on the other side of the highway instead:
Video credit: Lawrence Taylor
The water in the stream was a bit mucky and shallow in some areas, and required a few minutes of manually controlling AMOS to get it unstuck and drive it back to a location where it could be easily retrieved.
Overall, the demos were a good experience, and served to highlight a number of key areas that will require further development:
Posted by Murray Lowery-Simpson at 6:42 PM