Some work has been done over the last couple of weeks on trying to adapt the WeatherBox to function as an underwater camera enclosure. This work has been educational but not entirely profitable. Some underwater tests had been done in the pool, and at the time appeared to be successful, but they were too short (less than 5 minutes) to really prove out the leak-worthiness of the enclosure.

A longer test in a real-world environment confirmed that the enclosure leaks too quickly to be of any use for underwater pictures or video. A slightly modified version of the enclosure with a longer stem was attached to the underside of AMOS and used to record a video frame every second, for a 1 hour test along the shoreline in Cap Brule, New Brunswick. The stem was not really long enough to keep the camera underwater all of the time, and the mounting pins inside this particular enclosure had snapped off, so the camera board was not properly centered. The camera software uses an auto-brightness adjustment, which I think was confused by the alternating views above and below the water.

The camera ceased to function after about 20 minutes of operation. When the boat was taken out of the water about an hour later, it was half-full of sea water. The camera board was immediately rinsed and dried off, to no avail. A subsequent test confirmed that it no longer functioned at all.

Some decent depth, temperature, and conductivity data was collected for the test, showing a nice correlation between the 3 parameters: the shallower water was warmer and had a higher measured conductivity. 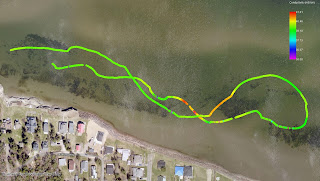 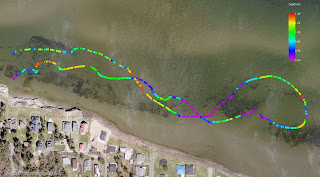 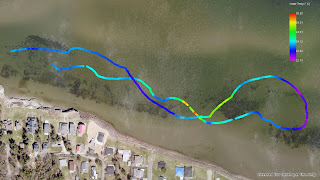 Here is a video created from stringing the individual 1 Hz video frames together and increasing the playback speed by 5x. Not much to see really, just a lot of bouncing up and down and the occasional piece of seaweed:

I'm going to test out some changes to the camera enclosure cap this week; at this point it looks like the weak point is the O-ring seal with the enclosure window.

Posted by Murray Lowery-Simpson at 8:56 PM