How to Run Down The River

This past weekend we were blessed with some nice warm, sunny weather so it seemed like an ideal time to try out the new AMOS-Cat boat on something more significant than the large puddle in our backyard. On Saturday, I biked down to the St. John River to check out a prospective launching area about 8 km upriver from the main downtown core of Fredericton. The spot had a bit of a parking area for 5 or 6 cars and a nice inclined path leading down to the water. The current looked a bit fast, but not so fast that I couldn't tow AMOS upriver in the kayak if necessary.

So I mapped out a course that would take AMOS about 8 km down to the Westmoreland Street Bridge, collect some sensor data and collect pictures at selected locations en route: 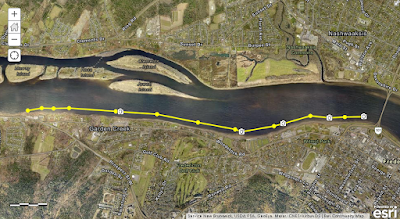 On Sunday AMOS started the course shortly after noon. There was the usual 10 or 15 minute wait for a valid GPS signal (a new GPS is on its way which should hopefully speed that up) and then it was off down the river. The strong spring current pulled it along rapidly at first, but it tended to overshoot the interpolated waypoints (there are 10 interpolated waypoints between each of the yellow markers shown above) and then reverse direction to try to get back to the waypoint that it had missed. The software has an algorithm which gives up on trying to reach a particular waypoint (and moves on to the next one) if the distance to that waypoint increases over any 4 minute interval. The problem on this day though was that in most places AMOS couldn't make any forward progress against the current, so it spent a lot of time just "hovering" out in the middle of the river, or even moving backwards in areas of strong current. I will need to change the algorithm to move onto the next waypoint whenever the direction to that waypoint is opposite to the intended direction of the planned route. That will result in some loss of waypoint achievement accuracy, but it should be preferable to waiting for long periods of time while the boat is barely moving against a strong current.

AMOS made it about 2 km down the river before I gave up and decided to tow it back upriver with the kayak. This was about 45 minutes of hard paddling! Here is a map of the route that AMOS took: 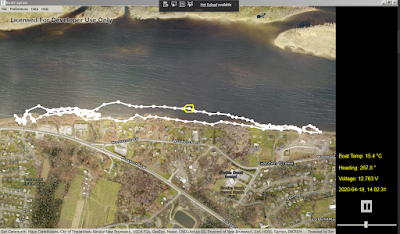 The return trip was much closer to shore to avoid as much of the current as possible and because the water was still freezing cold.

Lots of people were out walking on the nearby river trail, and many of them asked about the robot (safely from a distance) so I guess it was good publicity, even though it wasn't quite functioning as intended. Here is a short video taken of AMOS moving upriver in an area where the current wasn't too bad:


Posted by Murray Lowery-Simpson at 9:15 PM