Jata has been working on improving the appearance of the website; you should definitely go have a look: https://www.innaturerobotics.com/. There are now alternating pictures on the main page, color schemes consistent with the company logo, nice looking fonts and text that is properly lined up, and overall just way better organization and appearance! 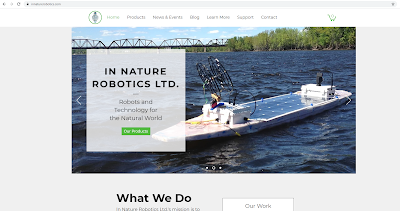 This past weekend I realized that so far this year AMOS must have been using an incorrect magnetometer calibration file. I must have copied over an old version of the file by mistake at some point over the winter. Certain orientations like east or southeast were still fairly accurate, which explains why the first couple of tests in April, where AMOS was travelling southeast down the St. John River went well. The previous method that I had used for calibrating the magnetometers involved maximizing and minimizing the X, Y, and Z magnetometer signals by slowly rotating the AMOS- IMU around and observing the data outputs on the screen until the observed min and max values no longer changed. This method could give inaccurate results however if for example there were some occasional spurious low or high outputs. So I decided to try a new method for calibrating just the X and Y magnetometers by rotating them slowly in a horizontal circle. By doing this, it was possible to use an iterative best-fit method to accurately estimate what the X and Y sensor offsets were. Testing out the calibration later on, the accuracy seemed to be typically within +/- 10 degrees, which is good enough for AMOS's navigation needs. On Saturday I took the boat out for a test in the same spot as the week before. It followed the track pretty well, and no towing was required, although I did need to push the boat away from some overhanging trees a few times, since I had forgotten to bring the chicken wire cage to protect the propeller. 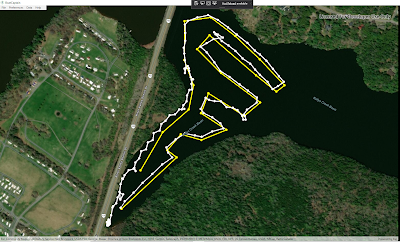 Here are the interpolated versions of the depth and temperature that the fish finder recorded: 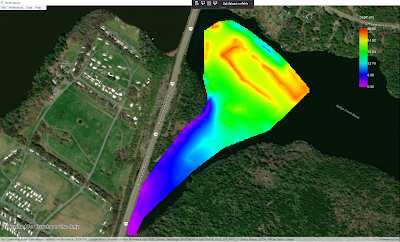 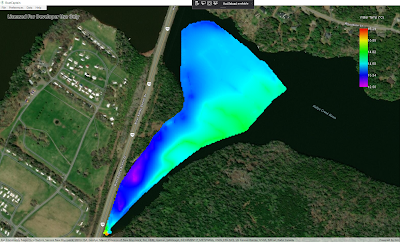 At the moment I'm updating the BoatCaptainMap software to include a lot of the functionality that the old version of the c++ application had. I created a C++ DLL from the old existing code to handle the communications routines, since these were a bit of a pain to write and I didn't want to do it again in c#. I also re-used some of the bitmap button images (stop sign and arrow buttons) from the old app in the new one: At some point, these will need to be made over too, but for now they're good enough.

Posted by Murray Lowery-Simpson at 6:40 PM