Work this week continued on efforts to re-wire the electronic speed controller (ESC) behind the propeller motor. This took way longer than I had planned, and involved swapping out the motor, swapping out the electronic speed controller, re-soldering all of the connections, re-calibrating the ESC, learning what all the ESC beeps meant and modifying the calibration software to be able to adjust all of the parameters according to those beeps. No matter what I tried though, the motor was always very choppy when run at medium to high speed. With nothing left to try, I resorted to Google, which fortunately came up with this web site that had a good discussion about some of the problems that can result with an ESC if your cables delivering DC power from the battery are too long: https://www.rcgroups.com/forums/showthread.php?952523-too-long-battery-wires-will-kill-ESC-over-time-precautions-solutions-workarounds

By positioning the ESC outside the box and behind the propeller, I had lengthened the cables delivering the 12 VDC power to the ESC by about a foot or so. The problem is not the extra bit of resistance that this adds, but rather the extra inductance that it adds. The inductance results in voltage spikes at the ESC, which can apparently result in erratic performance of the motor. The solution is to add extra capacitance at the ESC to help smooth out the voltage fluctuations. There is already a 30V 220 μF capacitor on the ESC, but the rule of thumb specified in the above website is to add an additional 220 μF capacitor for each additional 10 cm of power wire length. I added three 330 μF capacitors in parallel over the voltage inputs to the ESC. They were only rated for 25 V, but they seemed to improve things quite a bit, and were able to allow the motor to run at a normal speed.  I also tried adding an additional 330 μF capacitor to see if it might allow the speed to increase further, and it did a little bit, although not quite as much as I had hoped.

So now there is an ugly cluster of capacitors and an ESC mounted behind the propeller. These would need to be weatherproofed with some silicone or other material if used outdoors on a consistent basis. Better positioning of the solar charge controller would also allow me to shorten the wire leads that power the ESC. Really the only reason for positioning the ESC behind the propeller is to keep it cool. Having it inside the electronics enclosure risks having it heat up to 110 °C on hot days, at which point the ESC firmware immediately cuts its output power by 50%. This sort of thing was happening occasionally back in August when the weather was sunny and the outdoor temperature was close to 30 °C. 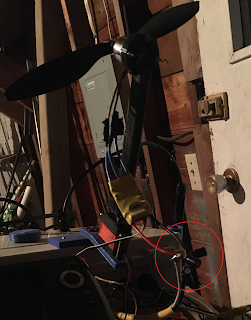 Cluster of capacitors are shown here circled in red.

On the weekend I took AMOS and its new capacitors downtown for a test run, and was happy that it beat its old record for going up and down the downtown section of river by 5 minutes: from 47 minutes to 42 minutes. The dissolved O2 levels were good too - I guess those are going back up again now that the water is cooling again: 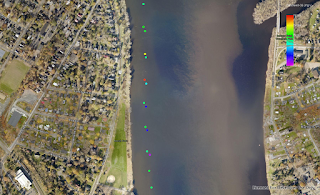 Posted by Murray Lowery-Simpson at 5:59 PM