Back From The Wilderness

Avid readers of the blog may have noticed that there was no entry last week; that was the first time in over 2.5 years that the weekly update was missed! Without going into too many details, a long 15 hour bike ride through New Brunswick trails and back roads turned into an even longer 24+ bike ride due to some navigation errors that resulted from poor preparation (forgot 1 phone charger and the other 2 chargers that were brought were not charged, did not bring a printed map (only printed directions), and did not bring proper equipment to change a bike tire, which turned out to be necessary for the last 50 km or so). After being rescued and returned to safety, I was in no condition to think about the blog, and thereby felt justified in skipping a week to catch up on some sleep. Many thanks to Kelly and Dad for searching for us and rescuing us after this misadventure.

The last time I had AMOS out for a test run was on August 22 at Kelly's Creek. One thing I happened to notice around the middle of this test was that the air propeller motor would sometimes audibly switch down to a lower speed, resulting in a somewhat lesser thrust. Going with the wind the reduction in thrust was not an issue, but on the return trip it was. Some testing in the backyard the next day revealed that the electronic speed controller (ESC) board output power became significantly less when it overheated. Currently, the ESC is sitting in the bottom of the back electronics enclosure, with the battery and a bunch of other electronics, so it makes sense that it could get pretty hot, especially if the weather outside is sunny and warm. By positioning the ESC outside the box, behind the propeller in the airflow however, the output power remained stable, presumably because the ESC was sufficiently cooled. Apparently drone makers know this already; there are instructions available on the Internet for applying a silicone conformal coating to the ESC board to protect it against moisture. The weather is starting to get cooler here, so I might not notice the overheating effect in future tests, but I think I'll re-wire things to put the board outside behind the propeller anyway.

Efforts are currently underway to re-design the WeatherBox (i.e. the waterproof enclosure for the camera on AMOS). I would like to get rid of the nuts and bolts and just have a window cap that screws directly onto the enclosure. This would make assembly a whole lot easier, and should look better too. Here are 3D printed versions of the base enclosure piece and an initial window cap (without the plexiglass window) screwed together: 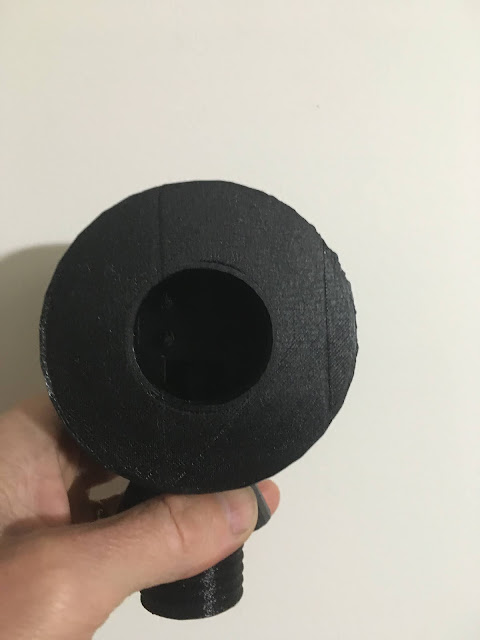 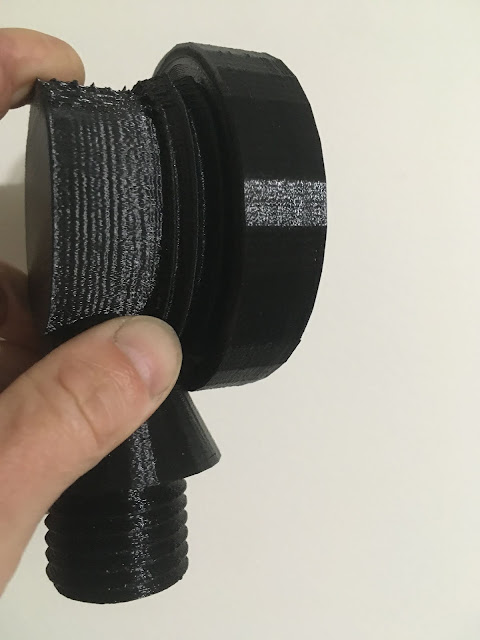 This past week was Jata's last as an intern at In Nature Robotics. One of her projects was an online 3D modeling / ordering tool for AMOS. I have been trying to teach myself 3D modeling using TinkerCAD and other 3D tools to continue her work, but so far have not had much luck. Importing and exporting with these tools tends to do unexpected things to the models. Possibly it is just user error though!

Posted by Murray Lowery-Simpson at 7:11 PM