Last Wednesday I was able to confirm by looking at the end of the dissolved O2 probe with a magnifying glass that there was a small crease in the membrane that was allowing air and water to leak in and electrolyte to leak out. So that confirmed why the previous readings had been getting progressively worse. Here is some better data collected at Woolastook with more electrolyte added and a new membrane over the end of the probe: 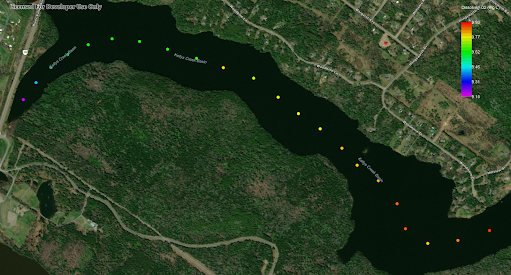 As you can see in the above screenshot, this time AMOS followed a route through the middle of the water, where it was relatively deep and there was little danger of damaging the end of the probe by dragging it against rocks, sticks, or other objects. The following graphs show the dissolved O2 data collected so far out at Kelly's Creek and near downtown Fredericton: 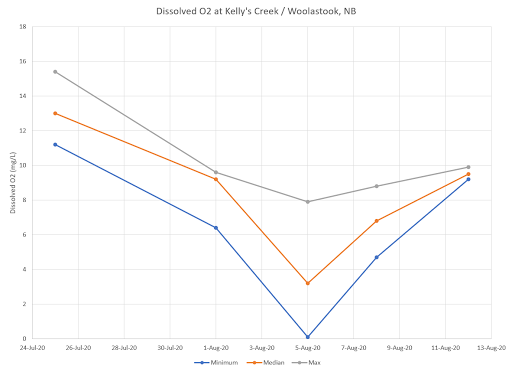 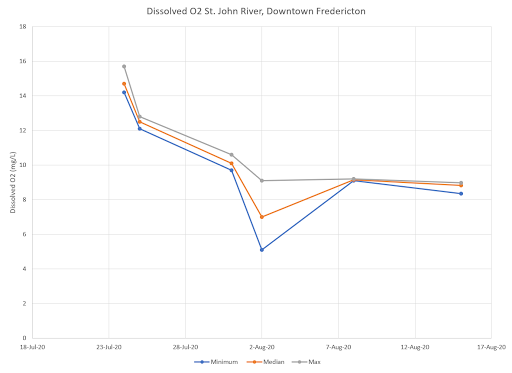 The results recorded in early August should be ignored, as the probe was most likely leaking at that time.

We entered an application in to the Ocean Startup Challenge last week: https://www.oceanstartupchallenge.ca/. I know of at least a few other people that have also entered submissions, so probably this contest was quite popular. On September 04, we will know whether or not our application made the short list.

Just this evening I finished a 6-page quick start manual for getting up and running with AMOS. It hasn't been tested on anyone yet, although Kirsten volunteered to try it out and see if she could get it to work, so I'll try to take her up on that. Check out our support page: https://www.innaturerobotics.com/support to have a look. RTFM! 😀

Posted by Murray Lowery-Simpson at 8:14 PM