Despite the 3-D printed "paddle fail" of a couple of weeks ago, I had not given up on the idea of 3-D printing something for paddle propulsion. This time around, I made a simple rectangular paddle with a hollow tube along one edge for mounting onto the motor shaft. To test out the concept and see if a pair of paddles would generate sufficient thrust for AMOS, I used a chisel to gouge out some motor mounting holes in the old surfboard, and wired up (this time properly!) the DC motor controller to an Arduino Uno, and wrote a simple program for driving both motors at the same speed.
It seemed like maybe it was faster than the air propeller version, although to be certain I guess I would need to program both boats for the same GPS course and race them against each other. It still remains to be seen how the paddles would fare in some of the weedy locations that the airboat frequents. This video recorded on the weekend shows the airboat version of AMOS moving through some pretty dense river grass (although the depth transducer and turbidity probe had to be pulled out of the water to minimize drag):
While AMOS was traveling through the river grass, it was also measuring the dissolved oxygen content of the water. From the few tests that I have done in the river near downtown Fredericton and out at Woolastook over the last couple of weeks, it looks like the dissolved oxygen content is dropping.  Here is the latest dissolved oxygen data from downtown Fredericton: 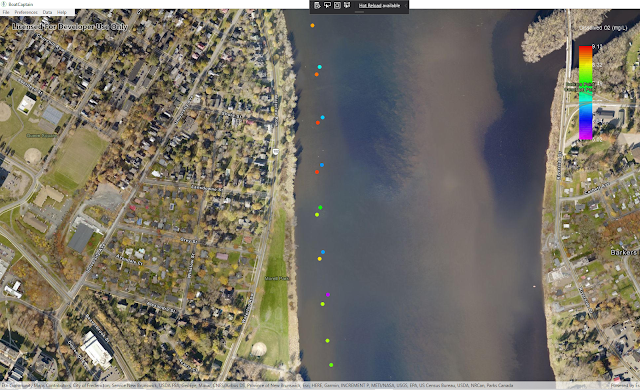 Dissolved oxygen content near downtown Fredericton on Aug. 02, 2020 varied from 5 mg/L (purple) to 9.1 mg/L (red).
Unfortunately our humid weather over the last few weeks coupled with repeated testing has dissolved the construction adhesive that was bonding the foam pontoons to the aluminum plates. To remedy this, I spent about $13 for a tiny package of two-part "marine" epoxy. It is supposed to offer a bonding strength of 4000 psi, and be waterproof. So we shall see. I re-bonded the delaminated sections a few days ago, and it seems to be holding quite strongly so far!
Posted by Murray Lowery-Simpson at 8:38 PM