A lot has happened in the last few months, both in the greater world and in my own life. The war in Ukraine has unfortunately occupied much of my attention. I'm hopeful that the Russian invaders will be repelled from that country, but the present situation there is terrible, and I fear for the worst, both for Ukraine and the world as a whole. In my own life, I started officially working full-time at Measurand in March, although I had been unofficially working there full-time since November of last year. This means a bit less time for AMOS and In Nature Robotics, but the job itself is interesting, involving embedded product development and firmware. Plus having a full-time salary is helpful, given the way costs seem to be going higher and higher lately.

In my own experience using AMOS, and in some of the feedback I've gotten from customers, one recurring issue has been the tangle of wires within the AMOS CPU box that connect the Raspberry Pi to the rest of the equipment (wireless module, AtoD, sensors, etc.). Sometimes one or more of these wires become disconnected, and it can be a challenge to find the disconnected wire and attach it to the correct location. 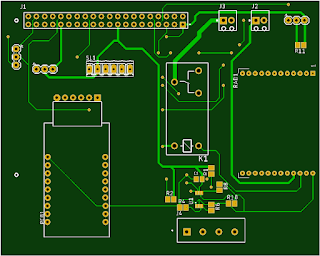 It has a 40-pin header that plugs directly into the Raspberry Pi board, and uses printed circuit board traces rather than wires to connect the AMOS wireless equipment, AtoD board, and temperature and humidity sensors. It also allows direct soldering in of wires from the battery box module (for the propeller and rudder control).

I have already noticed a few things that should be changed on the board, but the order for the first 5 prototypes is already in production, so I'll populate one to see how it goes, and then make some changes after that.

The weather here is warming up; I'll need to get the demo AMOS up and running again to do some weekend testing again soon!

Posted by Murray Lowery-Simpson at 8:06 PM