This past month I was able to get AMOS out to the water a couple of times for some testing. The first time, I noticed that the boat always seemed to want to head off into the opposite direction. Initially I thought that the problem might have been an invalid initial GPS position, but even after physically moving the boat to other waypoints further along the planned track, it persisted in moving in a direction exactly opposite to the planned direction. Testing a couple of days later at home showed that the compass error was consistently about 180 degrees. I tried using an old compass calibration for the same device, but it too gave similar errors. I also double-checked the IMU board orientation within its enclosure, but it was correct. The only thing I can think of is that the polarity of the magnetometers must have been reversed somehow. Nothing in the part's datasheet says whether this is possible or not, and I'm not sure what sort of event (large magnetic field nearby?) might have caused the reversal to occur. During the last calibration, the heat got accidentally left on during the final temperature calibration, which caused some of the calibration apparatus to melt, and undoubtedly exposed the chip to some higher than normal temperatures. Perhaps higher than its specified limit of 85 degrees C. Not sure if that could have caused the polarity of the sensors to reverse though.

For AMOS's second trip to the water, the IMU board was simply reversed, so that it could properly be used for navigation. The fish finder was running, measuring depth, and an underwater Weatherbox was used to record some underwater videos at various points along the course. Here's a short video of AMOS setting out on the course:

and the resulting interpolated depth map that was produced: 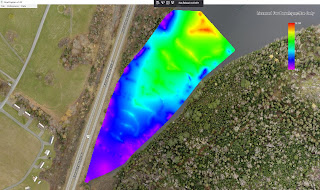 However, the Weatherbox had a bit of a leak, and must have quickly filled up with water, because none of the videos recorded were recognizable (mostly weird brown color flashes and bits of electronic noise). Unfortunately, the Raspberry Pi camera died after about 2 hours (the last recorded video was cut short) and couldn't be revived, even after a thorough drying later at home. Initially I thought that the leak might have been caused by the parts coming loose due to the temperature difference of the water (colder) vs. the air (warmer) where the parts were screwed together. But a later test at home in a bucket of room temperature water showed that the screwed together parts leaked fairly rapidly, and a closer inspection showed that there were some imperfections in the glued surface under the o-ring. Repeating the test with a different WeatherBox showed no leaking at all after 24 hours. Re-gluing the original WeatherBox, using a 10 lb weight to hold down the o-ring helped reduce the amount of leaking, but did not get rid of it entirely. It's possible there could be some other crack or imperfection in this WeatherBox that is causing leaking to occur. I think I will need to fit the WeatherBox with a leak sensor or two to help save money on Raspberry Pi cameras. 😏

I started working on populating the AMOS Wireless HAT board last week. I started with the 40-pin female socket for plugging into the 40-pin male connector on the Raspberry Pi, since I had some uncertainty about the board design and how it would fit atop the Raspberry Pi board. I soldered the 40-pin female socket to the Wireless HAT board, and then went to try plugging it into the Raspberry Pi board, but realized that the socket was soldered to the wrong side of the HAT board. Oops. So I took out another board, and soldered a new connector to the proper side of it this time. But when I tried to plug it into the Raspberry Pi board, it didn't really want to fit. I could make it fit by using a very large pipe wrench, but large pipe wrenches and circuit boards don't mix well. And commercial HAT boards plug into the Raspberry Pi board quite nicely, without any use of excess force. So I ordered some (hopefully) better 40-pin connectors on Amazon, which claim to be designed for use with the Raspberry Pi. I then tried my hand at soldering the tiny AtoD chip to the board, to see whether that was possible. It was not. The heat / size of my soldering gun, and my general lack of soldering skill was too much for the tiny pads, and they were easily mutilated and destroyed. So I also ordered a few evaluation-type AtoD boards from Amazon which are much larger and easier to solder, and adjusted the PCB design accordingly. Hopefully all of the parts and modified boards will be here in a couple of weeks, so I can try again.

Posted by Murray Lowery-Simpson at 7:27 PM