As the summer has progressed, the prevalence of weeds in the St. John River where I have done most of my testing has also increased. Lily pads with their long stems are especially problematic for AMOS's propellers, as the stems seem to enjoy winding themselves around and around the motor shaft, usually causing the motor to stall completely. From what I could read, this problem seems to be universal for all types of propeller driven watercraft. Some larger motors use a "cutter" disc on the shaft, with a sharp outer edge that serves to cut through entangling vegetation. Many of the smaller handheld electric motors (for scuba diving or recreational swimming) use a plastic cage or basket around the propellers, which also helps protect the user's fingers.

Hannah and I took a trip to Walmart to look for suitably sized kitchen strainers that might help to protect the propellers on AMOS from weeds. For a first try, we selected a pair of strainers that had a fairly fine stainless steel mesh. These would be excellent protection against weeds, but I was a bit afraid that the fineness of the mesh would limit the flow of water through the propellers and produce too much drag. I zip-tied and duct-taped the pair of strainers to the mounting U-bolts of AMOS and tested it out in the pool. The initial test was pretty disappointing, as AMOS was quite sluggish. Its top speed was probably less than half what it was without the strainers mounted. 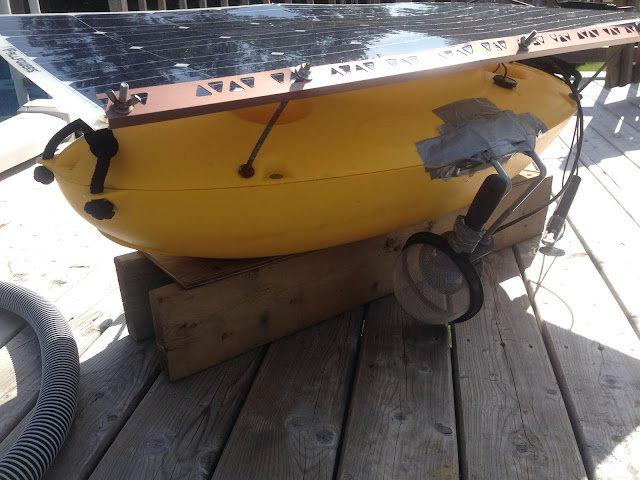 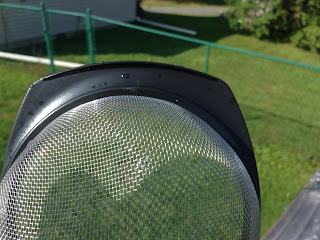 As can be seen in the above photo, the strainers had a plastic "lip" that would be quite useful if you were using them for their intended purpose on the edge of a sink. However this lip was dragging me down. Literally. So I hacked it off with a hand saw, and re-tried the pool test with the lip-less strainers. This time the boat did move faster; about half of its full speed without strainers attached. Perhaps these could be useful for a really weedy area, but I think I could probably get away with more of an open cage type concept, and still have pretty good weed protection.

This week has also seen incremental improvements in the software algorithms used for detecting objects in the water. As expected, this work has been somewhat slow and difficult. I'm working with a set of about 3700 still images that I recorded from an outing on the St. John River. Most of the images don't have any objects in them, but a number of them feature me kayaking in front of AMOS. If the kayak is not too close to the horizon line, it does get "detected" most of the time. The biggest problem at the moment is figuring out how to filter out all the "false positives" that arise from water droplets, shadows, sun reflections, etc. This is a pretty good challenge, but not a hopeless one I think. I think there is still lots of room for improvement in the algorithms that I am using for object detection.

The Mini LiDAR just arrived in the mail today, so I hope to have that hooked up soon and working in conjunction with the camera. I also almost finished hooking up the turbidity sensor this morning. There is a real mess of wires in AMOS now, so simple electronic hook-ups are not quite so simple anymore!


Posted by Murray Lowery-Simpson at 6:08 PM