Time Away From AMOS

We did a family road trip vacation to Toronto this past week, so I did not have much opportunity to work on AMOS. After returning home and checking to make sure that AMOS was still powered up and working, I was alarmed to see that it was neither powered up nor working. In fact, the battery was completely dead. Connecting the battery terminals to a wall charger for an hour brought it back to life, but the battery icon on the solar charger was flashing ominously, and I was pretty sure I hadn't seen it do that before. The battery voltage was ~ 12.6 V, so if the solar charging were working, I could expect the voltage to climb up to ~ 13.7 V in an hour or less, as the sun was shining brightly at the time. After an hour, the battery voltage still stood at 12.6 V, and the battery icon was still flashing. So something was wrong. I tore apart the "waterproof" connector that was used for the solar panel cables, and confirmed that the crimped wires in this connector were badly corroded. Again. This was the second time that my solar panel crimped wire connections got corroded and were no longer were able to conduct enough electricity to charge the battery.

This time I just made a solder connection with some heat shrink and duct tape to cover up the join. Hopefully it will last a bit longer than my crimped wire connections. I guess time will tell.

A couple of weeks ago I received an interesting promotional email about a couple of different low-cost LiDAR modules. Object detection using a camera-based system seems like it will probably work reasonably well most of the time, but any truly autonomous vehicle should have redundant systems in place to make sure that it doesn't smash into anything. Autonomous cars typically use a combination of cameras, LiDAR, and radar (see for example: https://www.sensorsmag.com/components/three-sensor-types-drive-autonomous-vehicles). The simplest of these was the TFmini LiDAR module (https://www.robotshop.com/ca/en/benewake-tfmini-micro-lidar-module-12-m.html) available for ~ $50 Canadian: 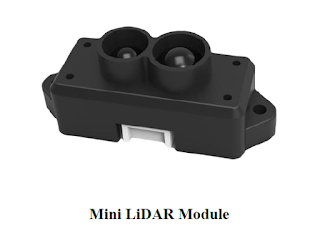 Unlike some of the higher-end LiDARs, this one is just stationary, and has a directional beam width of about 2.3 degrees. It can detect objects up to 12 m away, although in an outdoor environment, that figure goes down to about 7 m I think. It provides updates at 100 Hz, so if it works well I could probably set it atop a pan-tilt module and use it to find a "point-cloud" of objects in the immediate vicinity of AMOS. It also uses 3.3 V logic levels for communications, same as the Raspberry Pi which should make the wiring requirements relatively painless. I ordered one from the robotshop.ca and hope to have it in about a week. I'll probably set it on top of the camera housing and use it to look for obstacles in the immediate forward path. Adding a bit of simple logic should help to keep the sides of our pool from getting robot dents. 😉


Posted by Murray Lowery-Simpson at 6:01 PM