Too Bright, Too Wet, Too Weedy

I tested out the turbidity sensor that I had started hooking up last week, but found that it was greatly affected by ambient light.  As it was only a $14 sensor I had not really expected too much from it. Industrial quality turbidity probes run into the thousands of dollars. Still, it might be able to provide useful data if it were shielded from ambient light; so I designed a small "tow-boat" that can hold the turbidity sensor in an enclosed space with channels that should allow water to flow past the sensor, but also not let much light to enter. The tow-boat also has mounting holes for the pH and temperature probes and was just recently 3D printed by by 3dhubs.com, so should arrive soon:

I'll also need to add a cap of some sort to keep water away from the cable and some plastic tabs that have tiny openings in the sensor casing.

The TF Mini LiDAR sensor arrived this past week, so that was hooked up also, and I ported some Arduino code over to Raspberry Pi to connect to it and start getting data. It worked great, providing object distance data with ~ 1 cm resolution at up to 100 Hz. I figured I would try screwing it down to the front of the hull, just below the line of sight of the camera. As this unit was not waterproof, I applied generous globs of epoxy to the edges and around where the cable plugged in. I wasn't sure whether or not the light from the LiDAR would reflect off of water waves and get detected. A quick test at Cap-Brulé showed that it did indeed reflect off of the water: 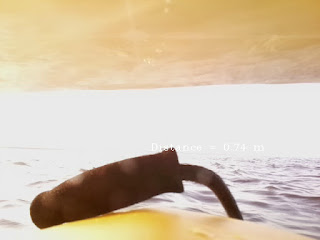 It's difficult to see in the above photo, but there is text super-imposed on it ("Distance = 0.74 m") indicating the object distance read by the LiDAR. This was one of 5 pictures taken before the LiDAR stopped working altogether. Apparently my application of epoxy was not sufficiently waterproof, or perhaps water spray leaked in around the transmitter / receiver lenses. Thankfully the same company (Benewake) that makes this particular LiDAR also makes an IP65 waterproof model, the TF02, so I ordered one. It looks like it uses the same data format, so hopefully it will just be plug and play. Probably I should mount the TF02 higher up, perhaps on top of the solar panel in order to avoid sensing reflections off of the surface of the water.

Other testing this week at Cap-Brulé has experienced lots of problems with seaweed. The boat could not go more than about 30 m before getting stuck in a patch of seaweed. Argh. It might be time to reconsider the decision to use electric propellers in the water. Possibly an "air-boat" design would work better. There are some RC boats available such as this one: https://www.youtube.com/watch?v=7mz1_1T-4FY that seem to have plenty of power (~ 500 W) and also seem to be fairly maneuverable. So I'm going to think about it for a bit, and maybe see if I can pick up some parts to make a DIY robot swamp boat.


Posted by Murray Lowery-Simpson at 6:10 PM