Work on AMOS took a brief pause for Christmas, but has continued on during this final week of 2020. On Monday, I had wanted to do another test of the RTK / GPS equipment using a laptop hooked up to the base station equipment (in the playhouse) and a second laptop hooked up to the remote "rover" equipment, that was moved around the backyard. This was similar to the previous test done last week, except a laptop replaced AMOS as the rover. Using a laptop running Windows allowed me to run the Windows diagnostic software that came with the equipment, to see what mode the rover was in ("acquiring 3D position fix", "RTK float mode" or "RTK fix mode"). The latter of these modes provides the best position accuracy and precision, down to cm-level. The weather that day was a bit rainy and snowy, which required the use of this handy recycling box / makeshift laptop shelter: 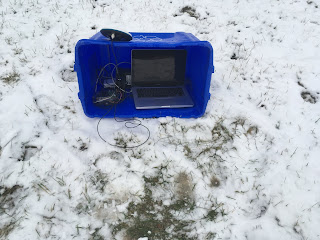 It soon became apparent after some walking about the backyard, that the rover antenna generally required a fairly unobstructed view of the sky in order to achieve the desired RTK fix mode for highest accuracy. If the antenna was situated on the ground near the pool, or near the house, it would fall back to RTK float mode, which is something like about +/- 1 m. Out on the water, there is usually a pretty good view of the sky, although in areas near the shoreline, embankments or tall trees might interfere somewhat with the received signal levels.
Other work this week has focused on the building of a calibration jig for the magnetometers on AMOS: 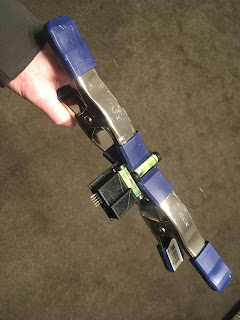 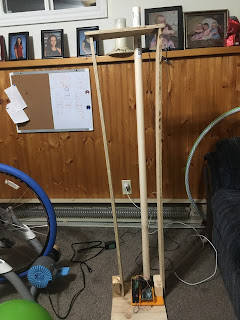 It's not fully put together yet, but the software is written for it, and the hardware just requires a couple more gluing stages to test it out. The magnetometers will be slid into a 3D-printed box that is glued atop a wooden pole with a couple of bubble levels to help keep them reasonably well confined to a horizontal plane. The metal clamps will be removed once the epoxy has finished curing (in another 12 hours or so). A small stepper motor at the base is used to rotate the pole back and forth in a circle. Extension cables will connect the magnetometers to the Raspberry Pi on AMOS, which will collect the circle data and use it to estimate the sensor offsets and gains.
I also tested out the new 11" composite propeller blade this week, although it was somewhat of a disappointment. My kitchen-scale-based method of estimating  thrust is admittedly crude, but I couldn't detect any noticeable difference between the 11" composite blade and the inexpensive plastic 10" one. They both maxed out at about 1300 g of thrust. The composite one looks quite a bit sturdier though, so possibly it might survive occasional run-ins with shoreline bushes and trees.
There is now a new product available on the In Nature Robotics website, the AMOS Board Kit: https://www.innaturerobotics.com/product-page/amos-board-kit. Here is a slightly cheesy promotional video for it that was auto-generated through Wix:

Posted by Murray Lowery-Simpson at 7:22 PM