Much of the past few weeks have been spent assembling the electronics boxes for the next AMOS version. The LiDAR module just arrived yesterday, so it is not on yet, but pretty much all the other electronics are assembled, including a new motor. 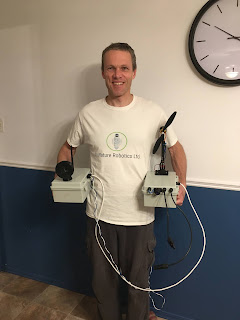 Both boxes combined, and including the 10AH battery weigh only about 3.5 kg. In a pretty crude test involving a kitchen scale and the propulsion / battery box positioned with its back end on the scale, I was able to compare the lifting force of the two propellers for approximately the same input voltage, and  the same 10" propeller. The new motor completely outstripped the old one, producing 2.5 times more lift for approximately the same input power, i.e. about 1300 g of force vs. about 500 g. Excited with these results, I strapped the electronics boxes onto the old AMOS surfboard: 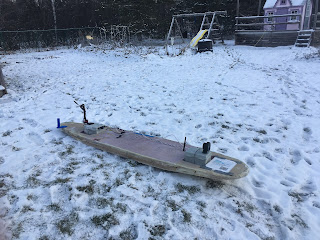 And took it down to the river this morning for a test:
The test was very short. AMOS made an abrupt 45 degree turn and then headed directly for this clump of trees (you can just make it out in the top center of this photo): 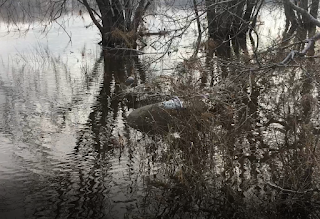 Unfortunately the propeller broke, and that was the end of the test. There were actually 2 reasons for the directional error. One was that the box containing the AMOS-IMU (containing the electronic compass) was about 10 degrees askew of the boat: 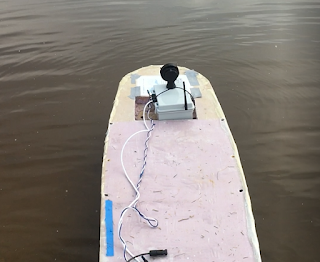 The other more significant problem was that the magnetometer offsets changed significantly with temperature. I did a test this evening in the backyard with the box pointing roughly east and reading a reasonably accurate 81 degrees when the box was still relatively warm, at 18 deg C. After being outside for an hour, the temperature inside the box was -3 deg C, and the heading had drifted down to 41 degrees: 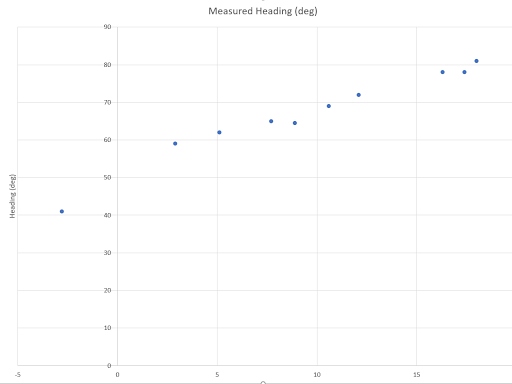 I don't remember temperature having as profound an effect on the previous AMOS boats, but then again I only did a limited amount of testing at negative temperatures. So to be ready for the next test (assuming it will be somewhat close to -3 deg C), I re-did the circle calibration in the backyard (the original calibration was done at room temperature). It wouldn't be hard to have the boat do its own magnetometer calibration in the water. But better would be to calibrate and model the offset and possibly gain fluctuations of the AMOS-IMU sensors with temperature.
In other news, the RTK antenna cables just arrived today, so this weekend I hope to do some backyard surveying work. 😎

Posted by Murray Lowery-Simpson at 6:58 PM