Since the test with the new motor described in last week's blog ended abruptly with a tree collision, I went back the following day to try again, this time with a better "cold-temperature" magnetometer calibration. I also launched the boat from the kayak, just beyond the trees as a precaution. There was a light wind, a fair bit of current, and the sun was out providing a bit of warmth. It was almost possible to forget that it was the middle of December.

The new motor did great - going against the current I  believe it was a lot faster than the old motor would have been:

On the return trip, going with the wind and current, the boat tended to oversteer and ended up going in a complete 360 degree circle a few times. Using a shorter surfboard, possibly with the propulsion a bit closer to the center would help with this. Adding some small fins to the bottom would help too. And likely the software could be better optimized to avoid oversteering.

I ordered a 6 foot kids surfboard: 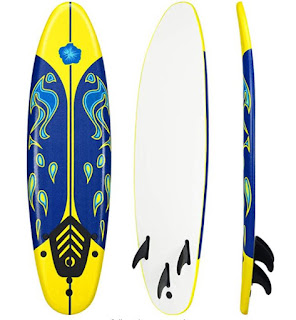 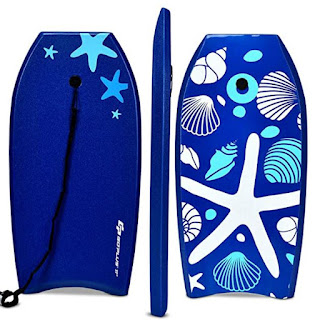 recently. I hope to try them out as AMOS "platforms" soon.
Other work this past week has focused on getting the RTK (real time kinematic) / GPS evaluation boards working with AMOS. On the weekend, I was able to get the equipment working well with one board / antenna system functioning as the "base" and the other board / antenna functioning as the "rover", both on the kitchen deck, and both plugged into the USB ports on my laptop: 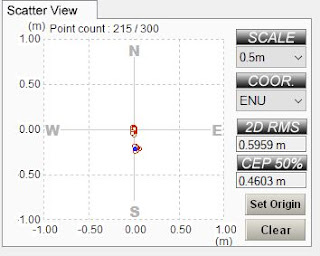 For the above GPS data, I waited with the rover stationary on the deck for about a minute, and then moved it about 20 cm south and waited another minute. Looks like about +/- 3 cm or so precision there!
Of course to get this working on AMOS, the output from the base unit will need to be sent wirelessly to the rover unit. The base unit only appears to be sending a few hundred bytes per second, so that should be OK for the wireless transceiver currently on AMOS. I'll need to hookup a second transceiver to the base unit. And also packetize the outgoing data, so that it can co-exist nicely with other wireless commands potentially being sent by a user controlling the boat and viewing its data. To get
a feel for the accuracy / precision without using the RTK base unit, I put the rover unit on AMOS and carried it around the perimeter of our fence, about 1 foot inside the fence: 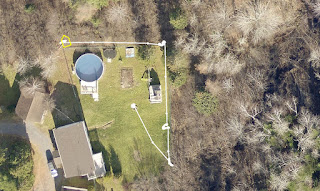 It seemed to be accurate to about +/- 2 m most of the time.
The final bit of news for this week was that the December issue of Ocean News and Technology finally arrived. There is a great article on the future of low-cost autonomous surface vehicles on page 42: http://digital.oceannews.com/publication/?m=9767&i=685854&p=42&ver=html5

Posted by Murray Lowery-Simpson at 8:13 PM